Note to readers: This is a fictional story in search of the true one! If you know of anyone who walked away from a DEWLine site for the last time as it was being shut down, please pass their name along to me at Brian@VE3UU.com.

Last Person Out… Shut Off the Lights.

While not unexpected, when it did happen, it all happened quickly.

Fred Teeter, the duty Console Operator, was first to know having just received a message from Pow Main via the lateral communication system that their site, LIZ-3, was to be abandoned immediately and that an aircraft had already been dispatched to pick up all station personnel. The information was formally confirmed by a teletype message a few moments later. 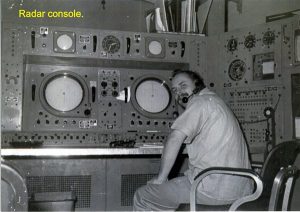 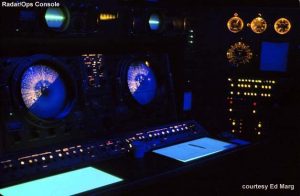 The Console Room’s lights were always kept off or low.

After picking up extension 21, the console phone, and filling the Station chief, Clive Beckmann, in on the details, Fred reluctantly left the console room, a room that had been manned 24/7 for 37 years and had never, ever, been left unmanned.

The process of abandoning LIZ-3 began in earnest.

It had to happen sometime. The rumours had been building for months and it was just a matter of time. They all knew that the nearby North Warning System’s (NWS) Short Range Radar (SRR) site was operational and ready to replace the original station that began operation in 1957. 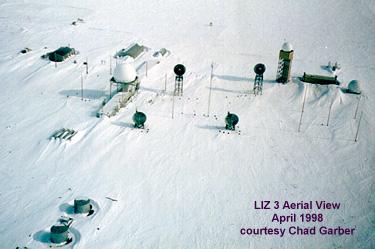 The LIZ-3 site with the nearby North Warning System replacement site shown on the right.

This is not the first time DEWLine stations had been shut down and abandoned. By 1963 all the smaller, 4-5 man Intermediate sites, known as I-Sites, had been declared technically redundant and shut down. Many of them still sat abandoned and derelict across the tundra at 100-mile intervals.

Still, it was a shock to many of the LIZ-3 personnel who considered the station as their home away from home and to be told to pack up and leave at a moments notice came hard. It felt as though they were being evicted and to a certain extent, that’s exactly what was happening.

Hard though it was, there were still things to be done before the DC-3 arrived to take them to POW-Main.

Most of the men had already packed what few personal belongings the had in preparation for the inevitable. Lyall Lalonde, the station mechanic took the time to move all the vehicles except the 8-man Bombardier snowmobile into the garage. This was more an act of professional pride on Lyall’s part rather than of necessity because once they were all gone, nobody would care. 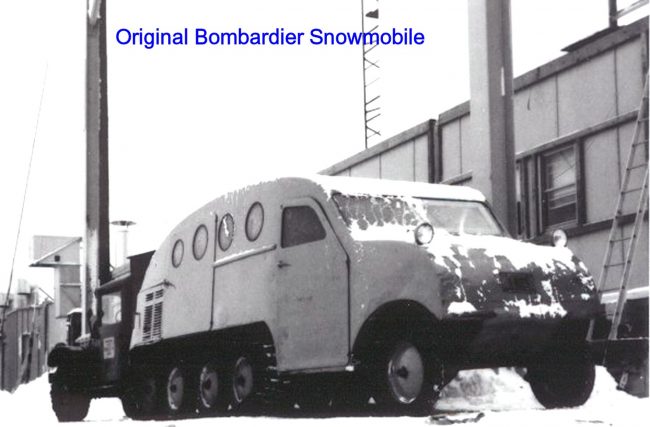 Paul Kelley, the Crypto Radician packed up the KL-7 crypto equipment that was located in a secure area behind the console. Paul had recently burned all the out-of-date KAA-29 Code Sheets and one-time pads so all that was left were the current ones to be packed securely away for transport. 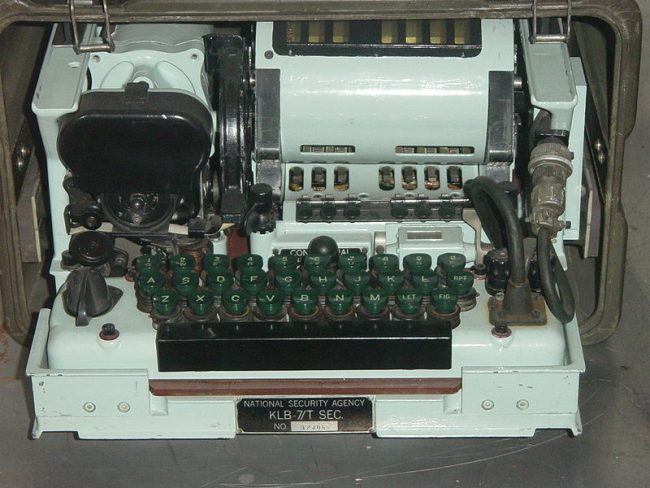 Each Main and Aux-site had the KL-7 crypto equipment installed.

Fred joined the other Console Operators in the recreation module while Brian Jeffrey, the Station Radician went about turning off equipment that had been running continuously for 35 plus years. The huge FPS-19 radar antenna slowly ground to a halt in the large radome above the module train. Then the air/ground equipment was shut off and finally, after notifying POW Main, the lateral communications system was shut down, totally isolating the station from the outside world.

Clive gathered the rest of the station crew in the recreation module while Lyall went down to the power modules and shut down the diesel generators for the last time. 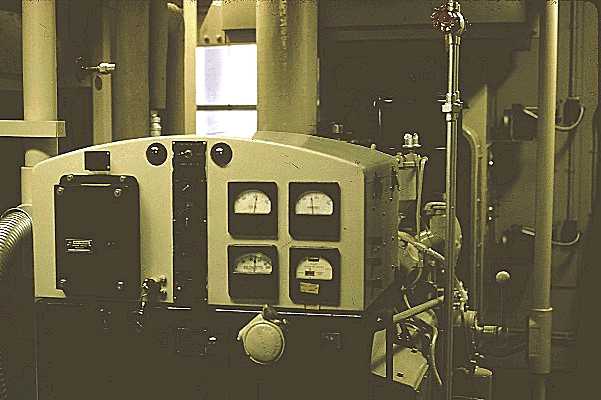 Typical station generator. One of three.

The lights went out and the site went dark.

It was with a sense of sadness that the men left the building, shut to door for the last time, and climbed into the snowmobile for their last trip to the airstrip.

As the LIZ-3 station crew piled joylessly onto the DC-3 for their final trip to POW-Main they all wondered what assignment awaited them there. They made the short trip in stunned silence. What would be next for them?

What would be next for LIZ-3 is that a salvage crew would return to remove any critical electronic equipment or anything with PCBs in them. These would be taken to the Main Station for salvage or to be sealed in 55-gallon drums and shipped to toxic waste sites down South.

Then the LIZ-3 site doors would be locked, windows boarded up, and the module train abandoned for, what was supposed to be, the last time.

Postscript:
During the mid 1990’s a massive project was began to clean-up the environmental waste that had been left behind from the many years the DEWLine was in operation. During that clean-up and reclamation, all the abandoned stations were removed, and the land returned to its natural state to the best of technologies abilities.

The cleanup project was deemed to be completed by 2014, a feat that cost as much to complete as it did to build the Line in the first place, some $575 million. Information on the DEWLine clean-up can be found here.

Author’s note:
While the above story is fictional, LIZ-3 is real and has a real story. Thanks to Clive Beckmann, we have some of that story.

For example, rather than totally abandon LIZ-3, the site was “pickled” and preserved for some unknown future use. All the water pipes were drained, and filled with antifreeze and other steps were taken for the protection of the site against the harsh Arctic elements.

Around 2005, some ten years after the site had been shut down, George Patkotak, traveled to LIZ-3 and returned with many photos of the interior of the preserved site. You’ll find those photos on the LIZ-3 page at here.

One last piece of historical trivia to end this tale. Clive Beckmann believes that the last person out of LIZ-3 was Wayne Jonnason (deceased).