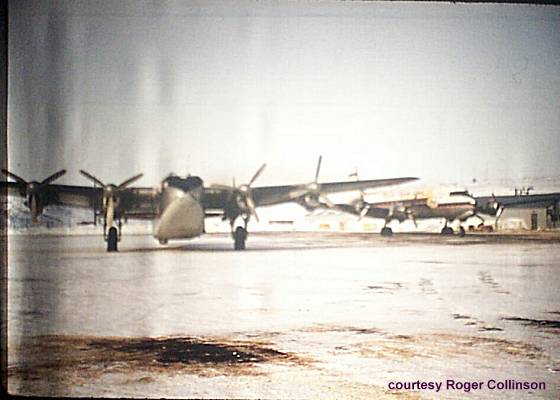 November 1955.
This is the York W.W. II plane that was used in the air drops. In the background is a DC-4 for travel to the sites with regular air strips and to go South. 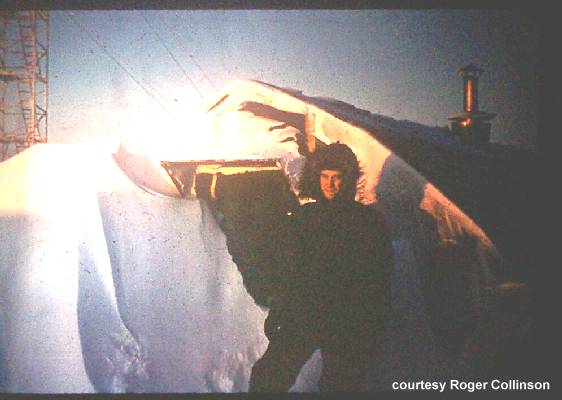 November 1955.
Yours truly beside the hut. Tower in background. you can see the chimney and the small gap around the top that probably let the air in for our breathing. Nice weather. The mittens I wore were W.W. II Air force gunner gloves with the separate trigger finger. Very warm. I wore them for years in the winter and when riding a motorcycle in Illinois. 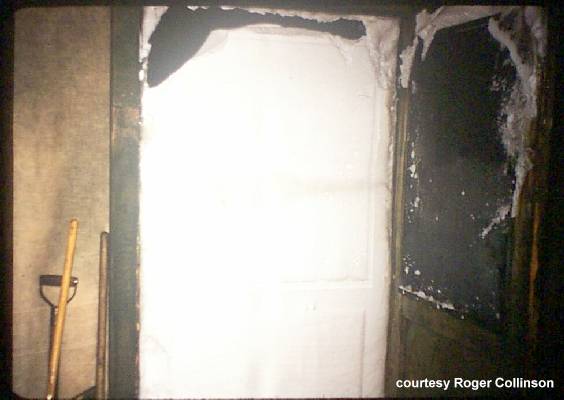 November 1955.
This is what we woke up to one morning (actually the second morning). The first morning we clawed our way out and cleared the door. The next morning this was it. I took a picture and then we shoveled. I had carpenters from the base camp come to the site and build an elevated vestibule to prevent a re-occurrence. It’s a wonder we didn’t die from lack of air. I guess the hut was not that air tight, or the air came down the chimney through the damper. Whatever. I thought it was pretty –Ha! Ha! Life in the Arctic. 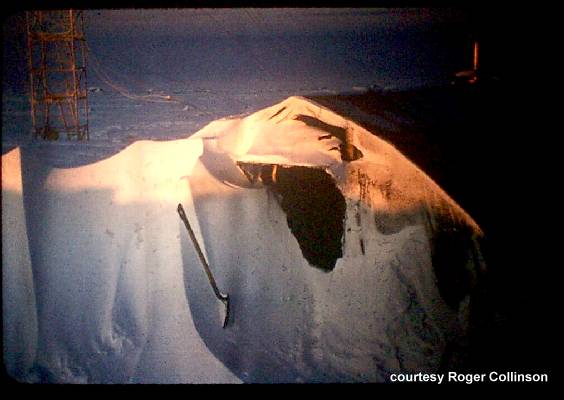 November 1955.
This is a sequel to the snow door. The looks of it outside at 9 A.M. Notice the tower in the picture. This was made up of 6 foot sections held together with spring clips. it took eight of them and a two foot header to mount the dish on. Nice weather for construction??? 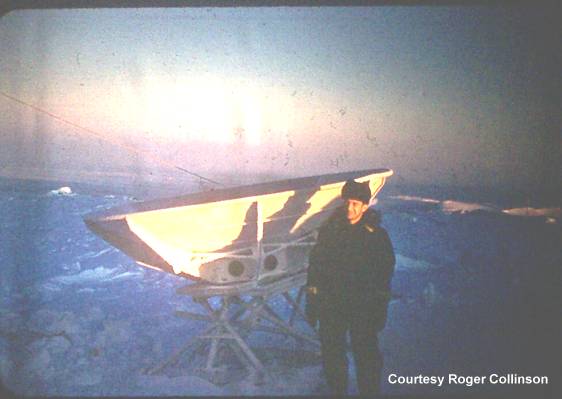 November 1955.
This is a shot of me standing by one of the dishes prior to raising it. It is a good comparison of sizes. I am 5 feet 11 inches tall. We hoisted the dish onto our 50 foot tower using a ‘Jin” pole. Once on top we had to position it to the point of greatest reception by moving it laterally and vertically. The same procedure was done at the transmitter end to get the best signal. The normal signal was about minus 95 DBM. We had daily reports to send on the signal strength, weather, etc.. To determine the Dew-Point we had a sling Psychomotor with two thermometers attached. We had wicks that we would wet and place on one bulb then go outside and twirl the thing , and take readings. A chart would allow us to cross the dry bulb and the wet bulb readings to get the Dewpoint. Needless to say, at twenty below zero there was not much moisture in the air. Speaking of cold. the first day we set up camp I opted to keep one of the riggers at the site as three people was better than 2, in case of arguments, etc. we could have a person to talk to. To accommodate the third man we had to bring in another cot from outside. Being the perfect dummy I went out without mittens and grabbed the cast iron cot frame. Guess what? instant stick! I pulled my fingers off, OUCH, and to this day when the temperature drops below freezing the fingers on my right had go numb. Always a reminder of dumb actions. Ha! Ha! 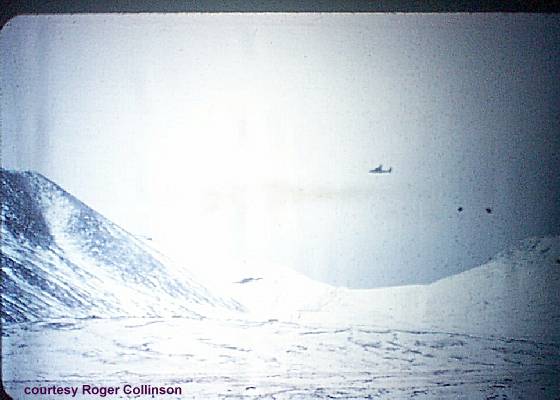 November 1955.
This is an air drop of supplies at Fox-5.. This was done between the summer?? sealift and the winter ice runways. The plane is a Lancaster York bomber from W.W. II. This drop had a package for me. After surveying the test site I decided that I would need some sort of protection in case of wild animals (bears). I was sent a 30-30 carbine (sealed by the RCMP), and a box of ammo. I guess they figured that in an emergency we could quickly break the seal and load the weapon, then fire it.

Once at the site my rigger decided that he wanted to investigate the area. I told him to break the seal, load the gun and go. he returned about 40 minutes later, his face as white as the snow. When asked what happened he said that as he was walking around he heard the sound of crunching snow behind him. He envisioned a bear tracking him. He continued a few steps, prepared the weapon for firing and then turned around quickly with the gun in firing position. What he saw was an Arctic Fox playfully following in his foot steps. He decided that he did not need any more walking. 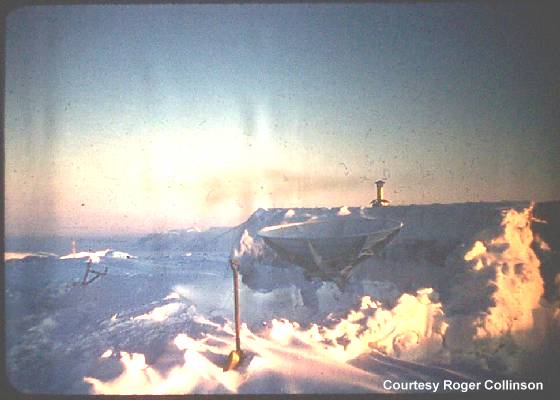 November 1955.
This was taken at Fox-5 showing one of the dishes on he ground before we hoisted it onto the tower. This dish was all aluminum, not like the ones we had in Alaska that were made of steel. Those weighed upwards of 300 pounds while this dish was about 100 pounds. The hut is in the background with the stove pipe protruding into the air. A nice place to be in November, 1955. 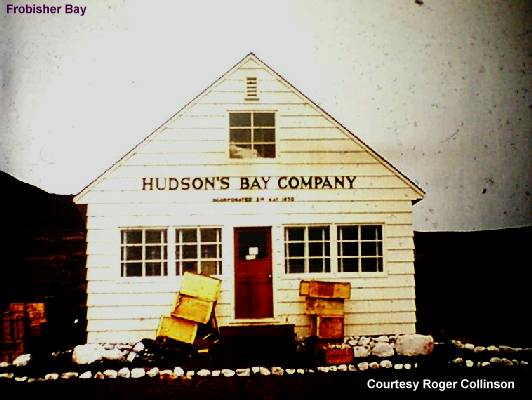 November 1955.
The Hudson Bay store at Frobisher. I saw natives receiving boxes of Hershey bars for animal pelts. I bought a seal skin rug to take home. A mistake. I did not realize that the pelts were not cured. I found out when the temperature in Illinois went up. Ha! 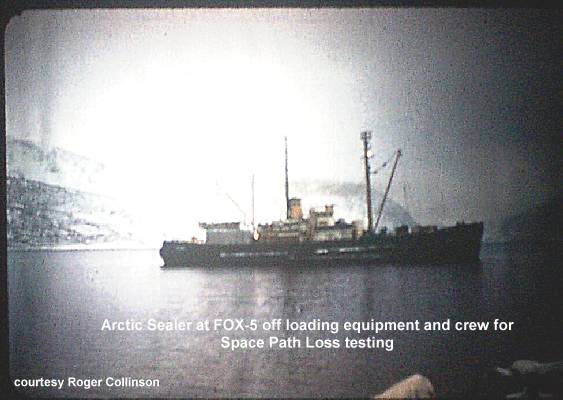 November 1955.
I forgot to mention a little about the ARCTIC SEALER. It was a surplus W.W.II U.S. Navy net tender. The owner bought it at auction, registered it in the Bahamas, sold all of the electronics gear, which paid for the ship! He used it for Sealing in the North. it smelled like it too. when the ship arrived at Frobisher a crewman was brought on shore for malnutrition. When we heard this we got some bread, butter, and canned hams to take with us (2 Marconi riggers, a F.C.C. Bull Cook supervisor, and myself. We gave the food to the ships captain, and never saw any of it. The first morning out I went to breakfast and had runny eggs and cold hash. My stomach did not go with it! I was seasick for the seven days we were the ship, and 3 days after I got off at Fox-5!! Enroute to Fox-5 we stopped at Cape Dyer to deliver some material. No one was at the beach so one of my riggers and a crewman hiked four miles to the construction camp. When the workers arrived they began to unload the material onto a raft to pull ashore using a D-8 and towline. They all left at noon for lunch and had the raft tied to the D-8. Problem! The brake on the D-8 was not set. The tide went out and so did the raft and the D-8. When the crew returned from lunch all the was visible if the D-8 was about 6 inches of the exhaust stack. One brave sole took a cable and dived into the water to hook it to the D-8. It was pulled back to shore and mechanics started to dismantle it right there. Fun in the Arctic! 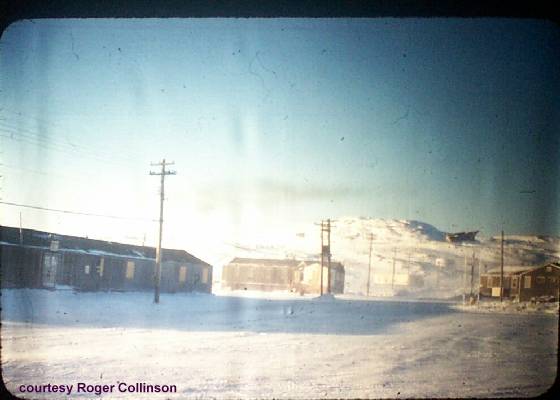 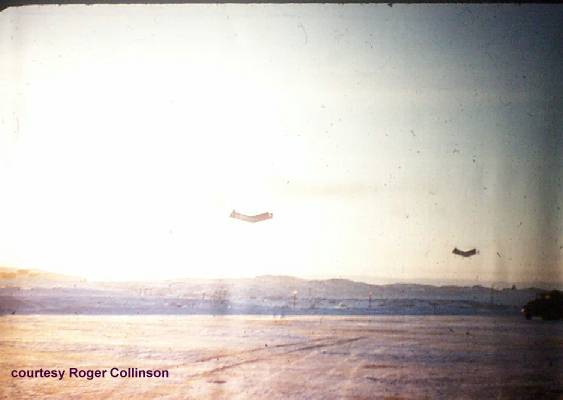 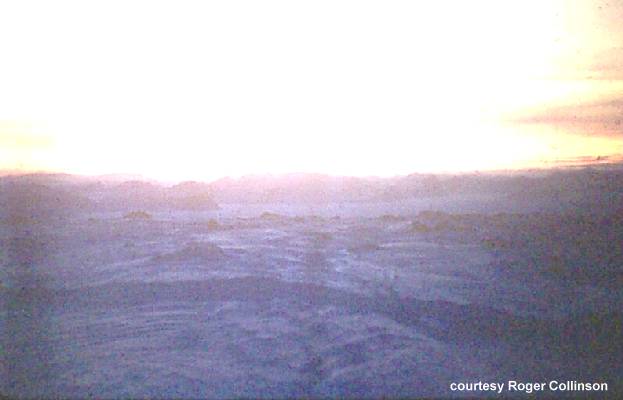 December 1955.
This is a sunset, at noon, on Broughton, Island. Great landscape??? 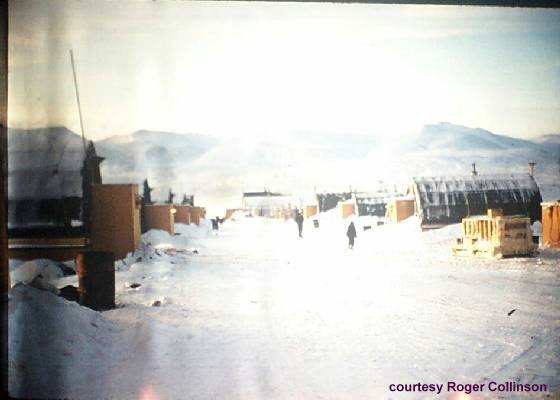 January 1956.
This is main street of Fox-5, Broughton Island, Jan., 1956. Note the vestibules on the huts. This is what the carpenters put on the hut at the site. The air was a little cloudy because all of the construction vehicles were kept running 24 hours a day. There was no shelter big enough to house them. If one of them quit it would freeze up and remain that way until the thaw. At the site our 1.5 KW Witte Diesel ran all day, except when we shut it down for an oil change. However, it was in a small insulated building so the heat did not dissipate as fast. The hut, also, contained our relief area. One-half of a fifty gallon drum with a wooden seat on it. VERY NICE???? Oh, for the pleasures of working in the Arctic! 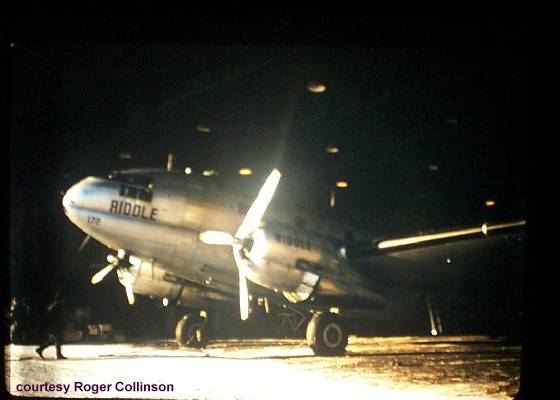 February 1956.
This is the C-46 preparing to take on our gear. It was flown to Frobisher then onto the ice strip at ResX-1 where we picked it up with a helicopter to move to the isolated test site. 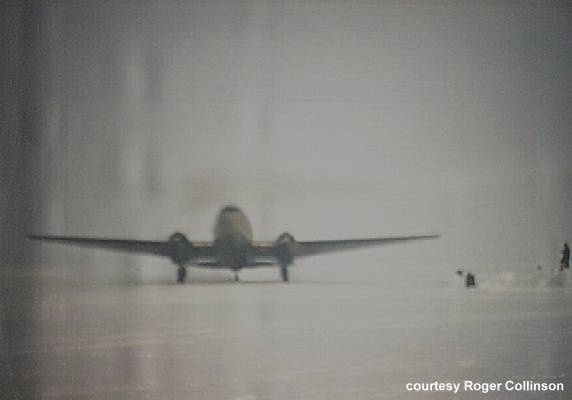 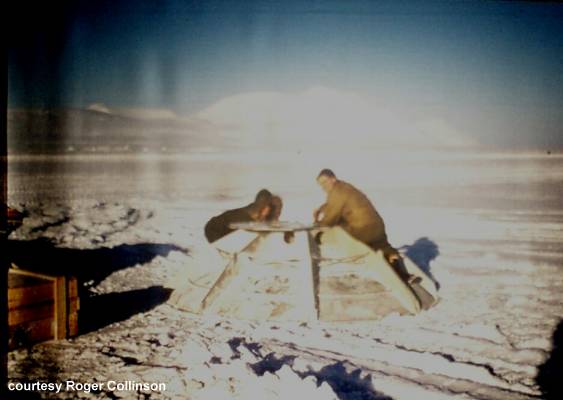 February 1956.
This is the final step in preparing to relocate to ResX-1. My radician, John Cole (Washington, D.C) and rigger, Emmett Logan (Montreal, Que.) are dismantling the dish to put it on a plane for Frobisher. This was on the ice strip where the planes landed. The ice had to 18 inches thick for a DC-3 and 24 inches for a C-46 Commando. The strip was bladed every day before a plane could land because of snow drifts. At the time I was waiting for a C-46 to arrive to take me back to Frobisher to prepare for the trip to ResX-1. 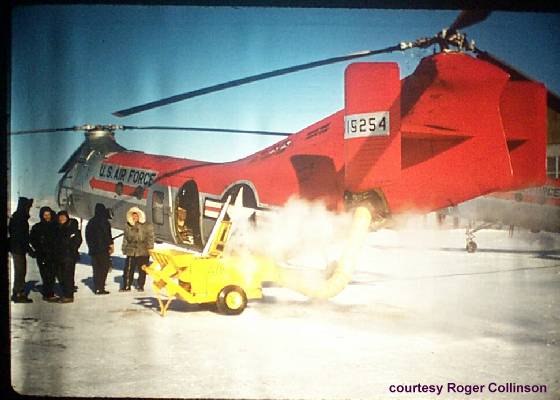 March 1956.
This is the U.S.A.F. H-21 Helicopter getting ready to take us to the ResX-1 construction site. Notice the heater for the engine. This was early March, 1956. We had remained at Frobisher for a few days to get some good food, clean sheets, and hot showers. A few of the nice things that we missed while on site.