(Note: much of the following information comes from Fred Teeter’s detailed notes that he took during his console operator training in the mid 1970’s with additional information provided by Paul Kelley’s prodigious memory of his time as a Radician at Fox Main in the early 1960’s.)

The Foxtrot (Noah’s Ark) message was a form of Emergency Action Message (EAM) that was (and still is) transmitted periodically and whose purpose was considered classified. The message was sent to the DEWLine stations periodically from the Data Centers at the Main Stations and then relayed to aircraft in a blind radio transmission. While in console operator training at Streator Ill in the 1970’s,  trainees were told that the transmissions were to be made on 236.6 MHz. In actual practice, in the 1960’s on the DEWLine, transmissions were made on the UHF emergency frequency of 243.0 MHz. This may have changed to 236.6 MHz in later years.

Although classified, the Foxtrot message was widely known as being part of the Strategic Air Command’s (SAC) positive control program for sending the Go-No Go message throughout their system. While its purpose has changed over the intervening years you can still here the “Skyking, Skyking” transmissions on specified HF frequencies (see below) of the USAF’s HF-GCS (High Frequency – Global Communication System).

Foxtrot Message Format
The content of the Foxtrot message, and indeed its name, have changed over the years. In the 1960’s, it was called the Noah’s Ark message and the content was usually two words and a letter, spoken phonetically. In the picture below, taken in the early 60’s, you’ll notice that the message was “Silver Cup Charlie.” It seems that in the 70’s, the message content changed to a 3-4 letter format. 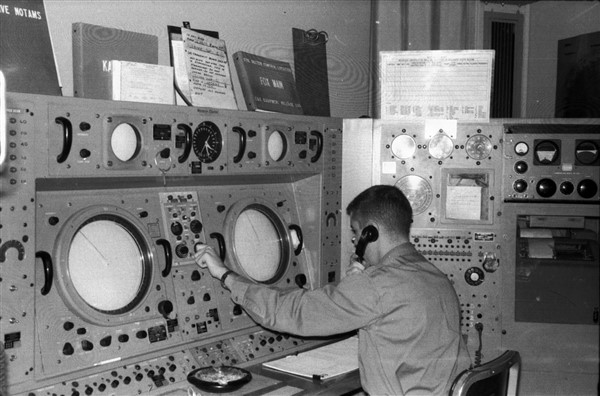 On the top of the console, to the left, you can see the corner of the KAA-29 Authorization Code book. 1961 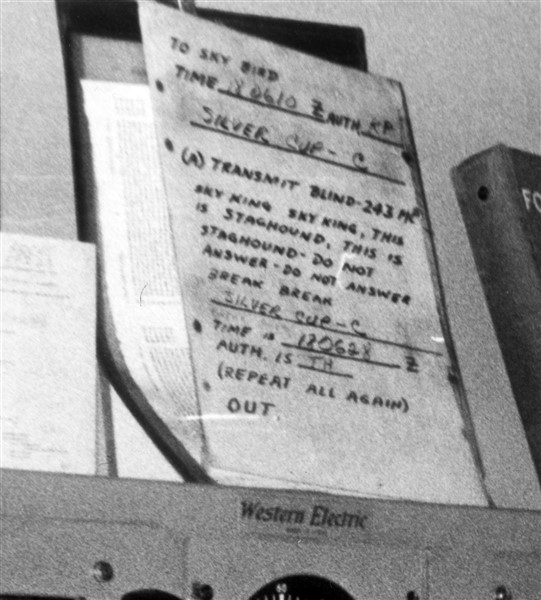 Also on top of the console is the “cheatsheet” for use in transmitting the Noah’s Ark/Foxtrot message showing the current message (Silver Cup C). 1961.

Foxtrot Message Handling Procedures.
When a new Foxtrot message was received at the Main Station Data Center, the Data Control Officer would open the circuits to the stations under his control and pass the following verbal traffic to the Console Operators:

At this point the console operators receiving the Foxtrot message go to the KTA 2000A booklet (in the 1960’s it was the KAA-29 one-time pad of voice authorization codes) on the console and open it to the proper day of the month and to the proper minutes after the hour and cross check the two letters next to the time to see if they correlate with the authentication letters provided by the Data Control Officer. If they correlate the console operator responds with:

Then the console operator proceeds to make a blind transmission using the following format:

Next the console operator contacts the adjacent station down the Line, moving west to east in the same sector, telling them to proceed with their Foxtrot message. Finally, the Foxtrot message is entered into the console log with the Data Center code underlined. (Note: Paul Kelley recalls that rather than that transfer happening within each sector, it started on the western part of the DEWLine and progressed sector by sector which would mean that no two stations would be transmitting the message at the same time. It may be a matter of training versus actual.)

Military B-52: “Staghound Radio, this is Boxer 24 on 236.6. Do you copy?”
Fox Main: “Boxer 24, Staghound Radio. Copy you five by five. Over.”
Military B-52: “Staghound, Boxer 24. Do you have any traffic for me? Over.”
Fox Main: At this point the console operator does not reply but looks up the proper authentication code for the current time and transmits the Foxtrot message in the format noted above.

Hearing those broadcasts still sends a shiver down my spine knowing what I know about their nature and purpose.