Plus 12 additional “Storm of ’69” photos, courtesy Bill Eatley, along with the story behind the weather story by Tim Vasquez, professional meteorologist.

Arctic storms are nothing new to anyone who spent more than a few weeks on the DEW Line. But some stations seemed to have more storms than others did. Dye Four, the easternmost station was also the closest to the Gulf Stream which may explain why the storms there were more intense than in other places. Located on Kulusuk Island on the east coast of Greenland, it was near the 66th parallel just a few miles south of the Arctic Circle. High winds and heavy snow were not uncommon.

Radomes were the structures that sheltered the radar antennas and are one of the most recognizable features in pictures of DEW Line stations. The radome at Dye Four (and at Dye One on the west coast of Greenland) differed from most stations as they were mounted on a building structure seven stories high. The radome at Dye Four, and the antenna components it sheltered, were blown away several times over the years. Each time, a stronger radome replaced it. By 1973 everyone thought Dye Four possessed the strongest and most durable radome ever built. But few would expect that the building itself would sustain more damage than the radome.

In January 1973, the Dye Four crew was ten Americans and six Danish citizens. On Friday, January 12, a very strong low-pressure system from the Gulf Stream hit the cold arctic air, causing a hurricane-like storm system. Winds were from the east (the first time anyone at the station had seen storm winds from the east) and gusted as high as 100 knots. The first report from Dye Four was a damage report saying the survival building had lost ten roof panels and one side panel and the Low Frequency (LF) beacon antenna had blown away.

Those not familiar with DEW Line stations might not know the significance of this. The survival building was used as a garage for vehicles on a day-to-day basis but was also the storage area for food and clothing to be used in case the main building was damaged. The most dangerous contingency planned for by the designers of the DEW Line was fire; like a ship at sea, fire on an isolated station would leave the occupants stranded. The survival building was located away from the composite, or main, building which contained living quarters and most equipment areas so that it could be used following any damage to the composite building. The LF beacon, located in the survival building, was the navigation aid to aircraft approaching the station.

On Saturday more damage to the survival building was observed as well as damage to the billboard antennas used for communications. The anemometer began to read lower than expected and on Sunday it was inspected and found to have been damaged. All wind speeds after that are estimated based on readings at the airfield five miles away. The first damage to the composite building was observed when a 12 foot by 8 foot hole opened in the roof. Equipment to begin repairs was loaded on aircraft at the Air Force Base at Sondrestrom but the storm precluded any attempt to deliver it.

The Station Chief of each station was responsible for keeping the chain of command informed of damage. Teletype messages using a standard format called an RPIE Outage Report were used to do this. On Monday, January 15 the Station Chief reported debris falling into the station was coming from the roof panels as they disintegrated. An effort was made to tie them down from the inside but was unsuccessful and the panels blew away. The next report was sent by the Sector Manager at Sondrestrom reporting more damage and saying, “Sector Manager sends as Dye4 personnel are busy surviving” station personnel who have been there over seven years say this is the worst they have experienced “including radome blowaways.”

The stations in Greenland were built a few years after the stations in Canada and Alaska and construction differed somewhat. A steel beam framework was covered by “galbestos” panels consisting of a sandwich of galvanized steel on the bottom, corrugated steel on top, and filled with asbestos. These were 33 inches wide and varied from 8 to 21 feet long. They were attached to the beams with self-tapping metal screws. As they were damaged by the wind, some asbestos blew away while some fell into the building.

On Tuesday, the wind abated but a new danger became apparent: snow. Snow began accumulating in the attic and snowmelt dripping into the equipment rooms caused equipment to fail. Quick thinking and ingenious action saved the station from losing contact with the “outside world” and to continue meeting its mission. Tarps and even blankets were used to shelter the equipment from snow and water. In one case, water fell into a high-power transmitter and sparks flew as it failed. A quick-thinking technician poured a mop bucket of alcohol into the equipment and used fans to dry the water out so transmitter power could be restored. Personnel ventured outside to better assess damage and take pictures. But, the weather forecasts called for the storm to continue once the eye passed the station.

On Wednesday, January 17 winds resumed from the opposite direction. These new winds seemed to find every weak spot to cause new damage. Pressure caused by wind blowing down into the walls caused them to flex, breaking the electrical conduits and endangering communications again. Roof panels rolled up like the lid to a sardine can. Roof panels fell into the building, causing more damage.

Strange things happen during weather emergencies. On Thursday the winds dropped to 30 knots with occasional gusts to 50 knots. The heavy snow decreased to a light snow visibility improved. This continued through Friday and the entire station and surrounding area was inspected and the damage was cataloged. Station personnel all wanted to see the extent of damage and take pictures.

Additional equipment had been loaded on aircraft at Sondrestrom and was ready to be rushed to the station along with additional personnel. But the airfield was not ready to receive aircraft. It was located approximately six miles by road and 1000 feet lower than the station. A few hours break in the weather might allow aircraft to reach Dye Four, but under the snow on the airfield was a heavy layer of ice resembling a skating rink. Even if the Danish personnel at the airfield managed to clear it, five miles or more of road still had to be cleared.

On Saturday, January 20 a new storm generated by a low-pressure system to the south, began to hammer the station. By Sunday, winds were gusting at 115 knots, accompanied by heavy snow. The best description of what was happening to the building was “structural shudders”. Station personnel, cold, wet, and exhausted felt a few shudders of their own. Living quarters (on the second floor) had been abandoned and everyone got what sleep they could, when they could, in sleeping bags on the floors of the warehouse and recreation areas.

Monday, January 22 brought wind gusts of 150 knots. Debris and even rocks flew into and past the station. A truck had been parked near the station to shelter it from the earlier wind. A rock blew through the windshield and the sudden increase in pressure caused a door to blow off. The truck slid along the frozen gravel about twenty feet.

Inside, things began to deteriorate quickly. Daylight showed through the seams of ceiling panels in the area used as a gymnasium above the power generation room. Within an hour, ceiling panels fell into the area, followed by snow. The door to this area was nailed shut. The ceiling in the communications equipment room began to flex to such an extent that light fixtures flew off and onto the floor. The roof and ceiling over the power generation room begin to disintegrate and all personnel rushed to the generator room to help pick asbestos from the panels off the air filters so the generator engines could continue to run. As a final insult, the anemometer, which by then was only recording wind direction, blew away.

On Tuesday, January 23 the wind subsided. All personnel on all DEW Line stations looked forward to an aircraft arrival but the flights arriving several times per day over the next week or so were greeted more cordially than any aircraft anywhere. A six-week effort involving up to 150 additional personnel restored the station to full operation. In addition, many “sightseers” from project headquarters as well as various Air Force organizations inspected the station.

To those who had experienced it many comments were comical, to say the least. For example, one USAF officer told the station chief, “I can’t believe you all stayed. I would have ordered everyone to abandon the site.”

The station chief answered, “Where would you have gone?”

And the radome? It suffered slight damage but survived with no loss of structural integrity. 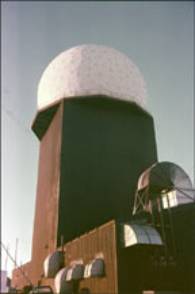 Radome on the Building Structure. 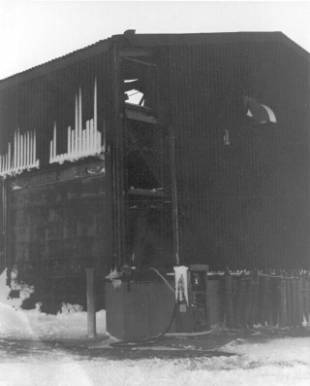 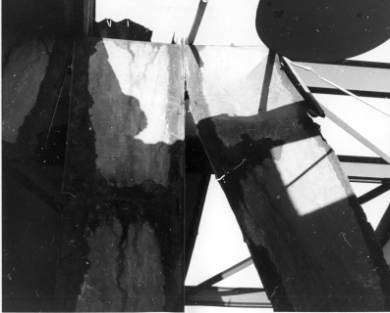 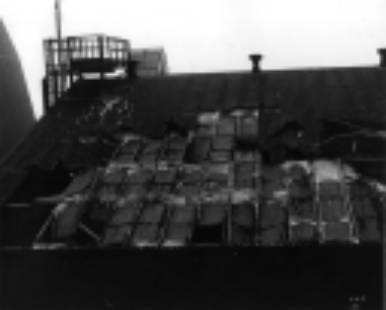 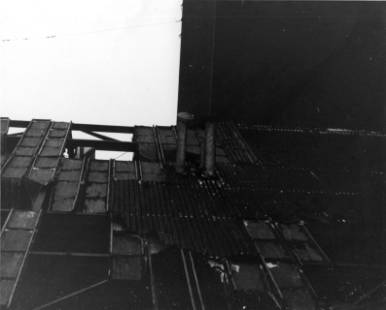 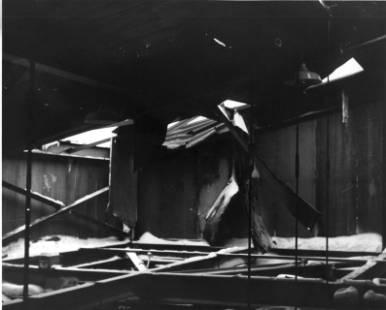 Attic over the Communications Equipment room taken from the Heat Exchanger room – Sunday. 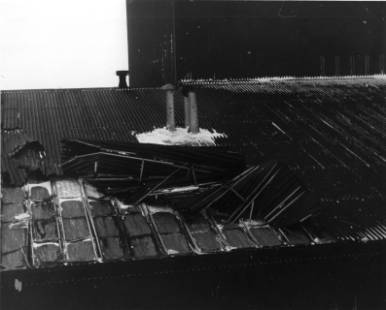 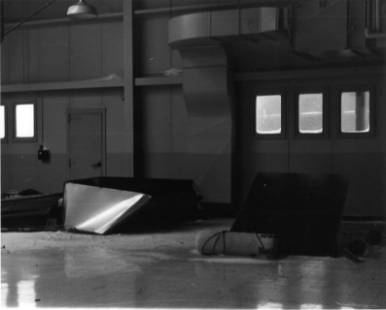 Debris and snow in the Gymnasium Area – Friday. 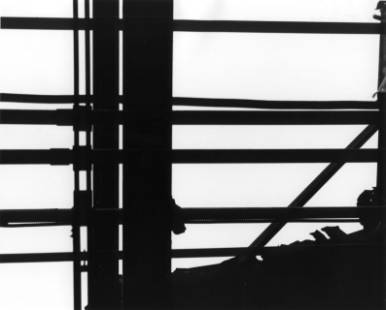 Aftermath of the Big Storm of ’69 photos. Courtesy Bill Eatley. 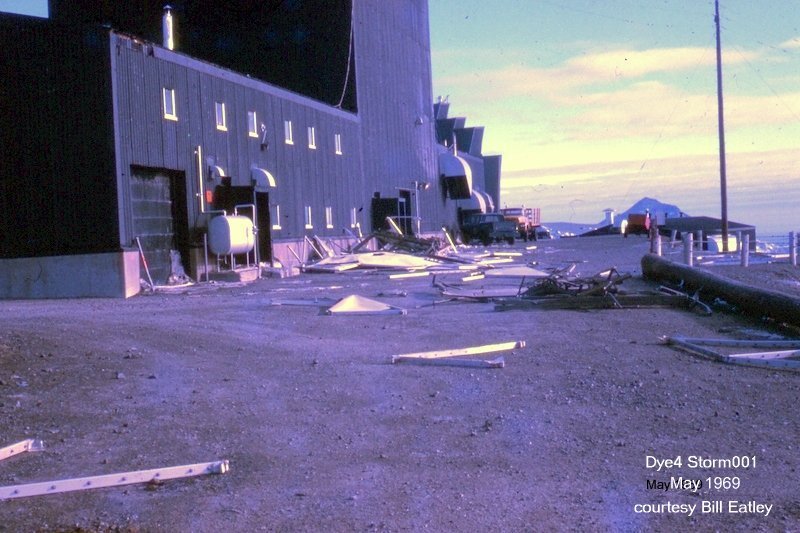 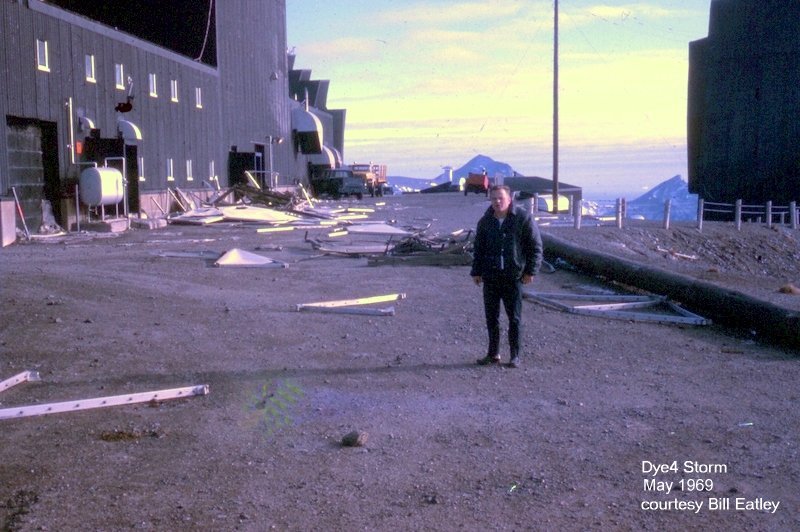 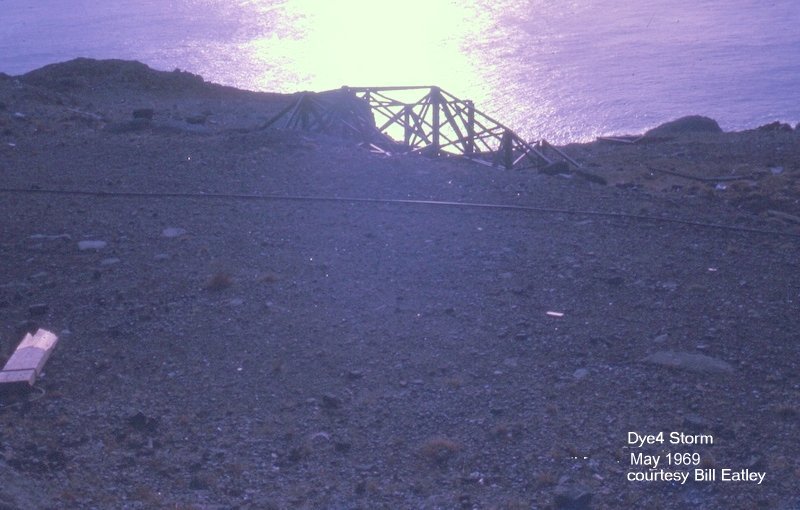 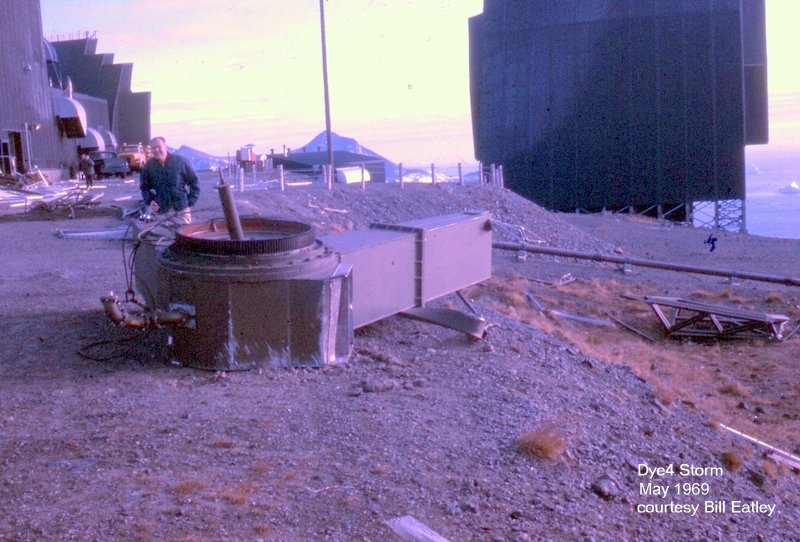 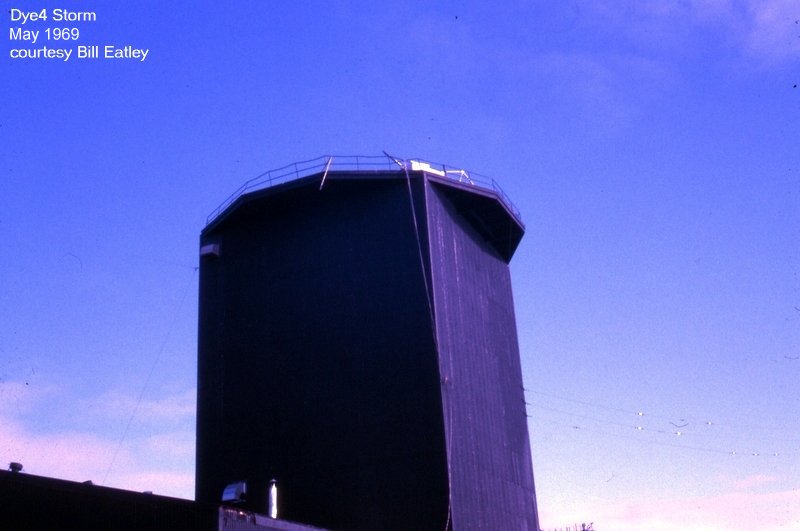 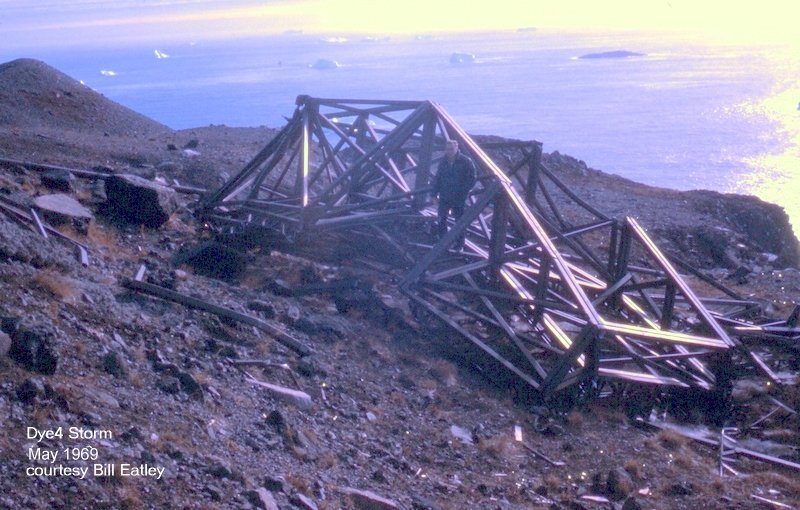 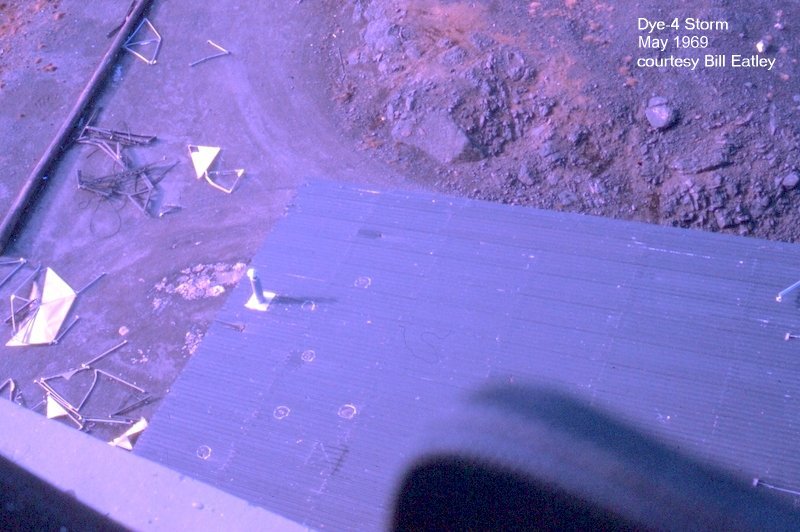 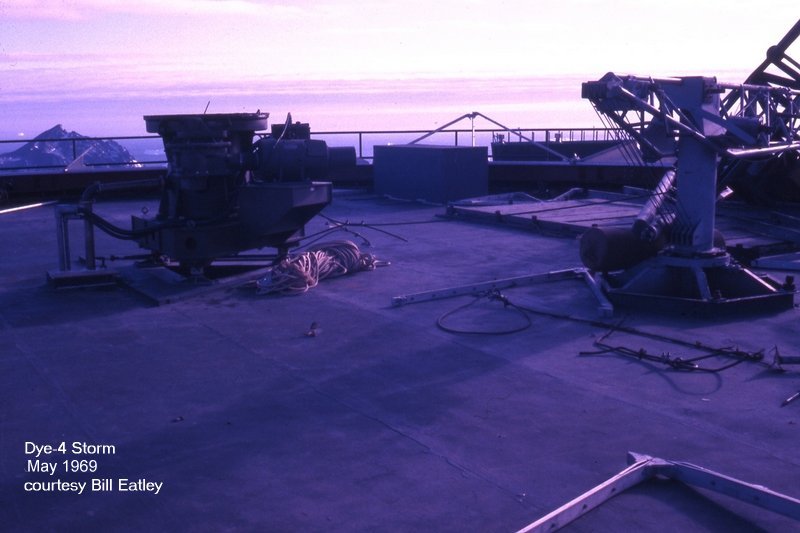 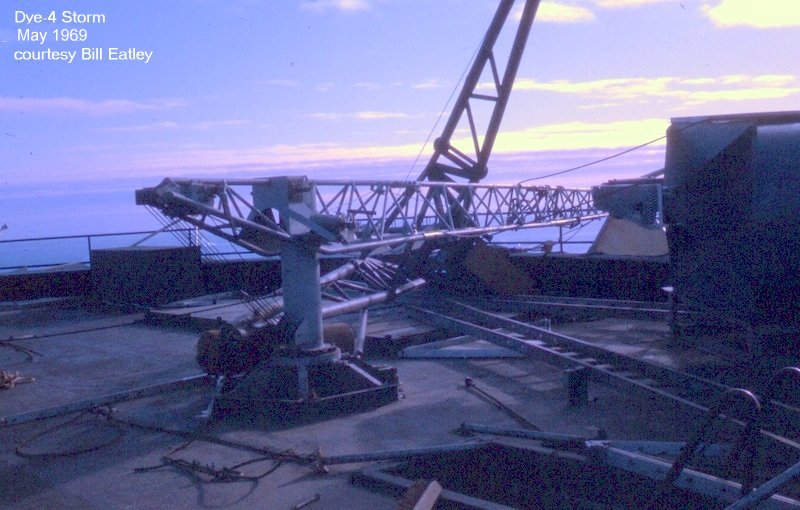 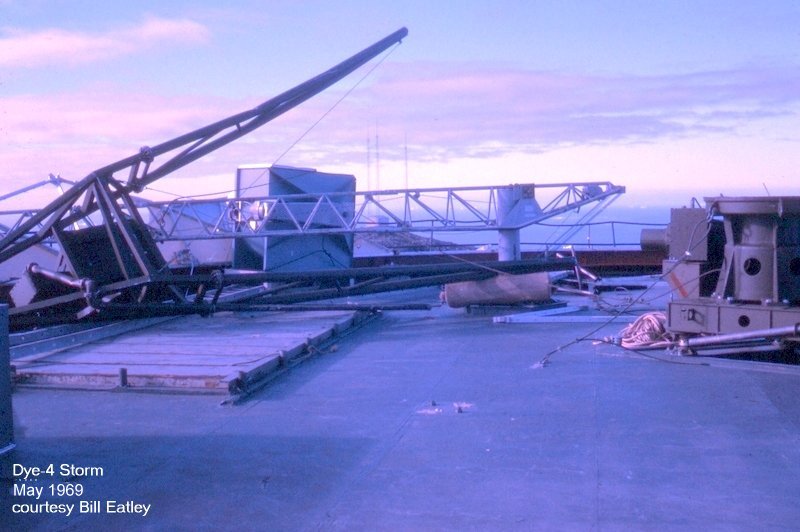 Editor’s note: In January 2018 I received an email containing the following information from professional meteorologist Tim Vasquez after he had viewed this page. Here is the story behind the story from a weather perspective.

DYE-4 is in an interesting location. Meteorologically, the region between Iceland and Greenland is a sort of graveyard for weather systems during their occlusion phases, and during this time in the winter they can be quite severe as they dissipate.  This can couple with katabatic winds coming off the Greenland ice cap.  Normally the air temperature on the ice cap is naturally cold due to the elevation, but if it is significantly colder there, this can generate a katabatic wind due to the density contrast.

DYE-4 has had many destructive windstorms, including one in January 1973, and another in spring 1969.

As part of my business, I warehouse observational data for insurance and energy companies.

Let’s look at some of the 1973-1990 records.  The lowest pressure was 915.1 mb (27.02 inches).  For most wall barometers this would point the needle straight down or wind it around counter clockwise to the bottom right side.  This reading would qualify as a Category 5 hurricane if we observed that in the tropics, but it’s the strong Coriolis force at Greenland’s latitude that prevents the full kinetic energy from being realized.  This event happened on January 12, 1983.  The January 15, 1973 event qualified as the 33rd lowest pressure reading at DYE-4, with 963.7 mb (28.45 inches).

Attached is some DYE-4 raw data, as transmitted over teletype, for the 1973 storm for those who want to relive it vicariously.  Feel free to look up any reference on decoding synoptic observations and this will help you make sense of it.