The following extract is taken from the book “A History of the Air Defence of Canada 1948 – 1997” by the NBC Group.
Dawson Creek,famous as Mile Zero of the Alaska Highway was the site of an RCAF Station during WW II. RCAF Detachment Dawson Creek became a station in September 1944. It was an ancillary non-flying unit in support of Northwest Air Command’s staging route for aircraft enroute to Alaska and Russia.The station disbanded in March 1946 and on 01 October 1956, ten years later, re-emerged. In April 1957, manned by RCAF operators, it only had a detection function as the identification systems were not yet installed. The station (Sector control Station 901) was declared operational at the beginning of 1958, and later that year began receiving administrative and logistical support from RCAF Station Namao Alberta. RCAF Station Dawson Creek disbanded at the end of March1964. 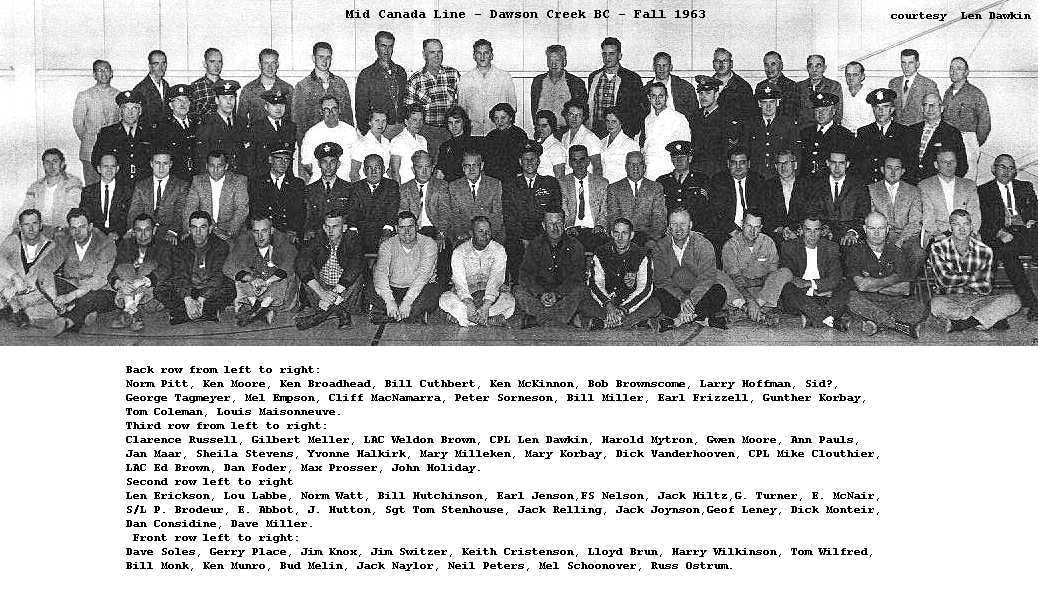 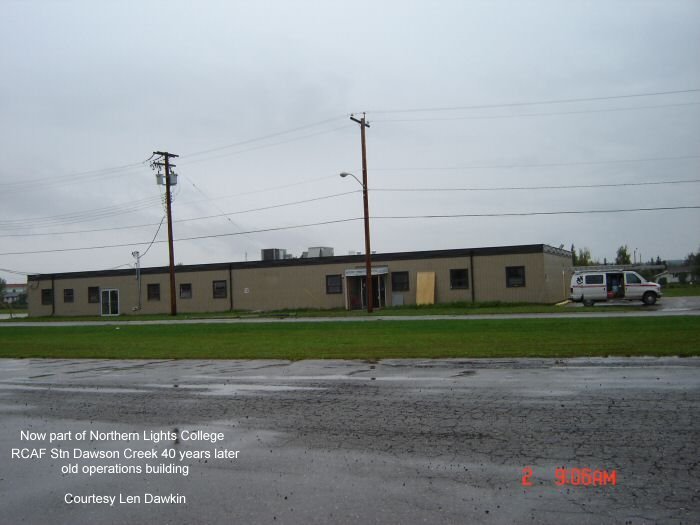 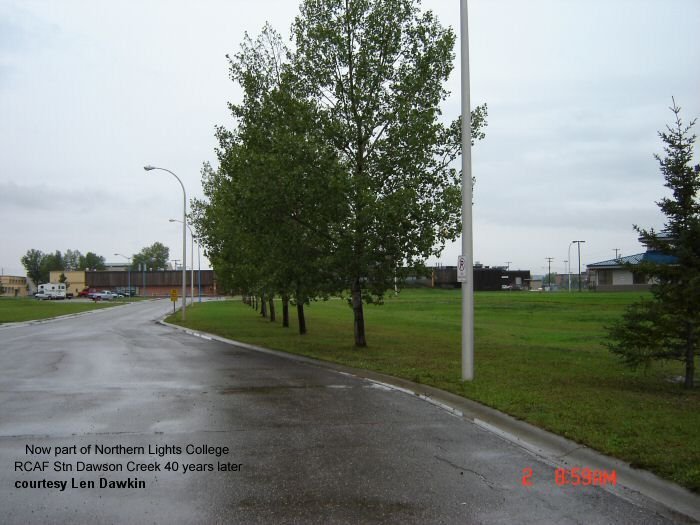 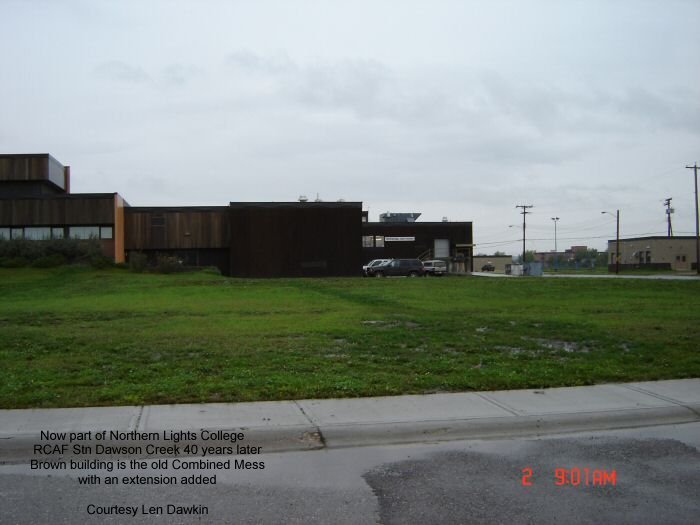 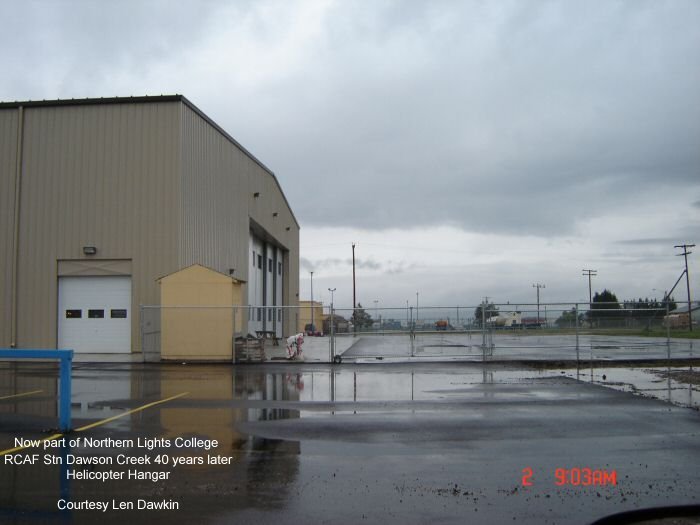 The following article was researched and written by Paul Dampier,Registrar Northern Lights College, Dawson Creek BC

When the Cold War Came to Dawson Creek

Most residents of Dawson Creek think of the winter months from November through March as being the annual “cold war.” In an earlier era, however, there was a much longer time – from 1956 and 1964 – when the political Cold War was very much present in the city. The evidence of this presence is still apparent to anyone driving along 8th Street and looking at the site and buildings of Northern Lights College.

Following on World War Two, the 1950s was a period of heightened political and military tension between the Union of Soviet Socialist Republics and the United States of America. Referred to as the Cold War, it had as its strategic battleground all of Canada’s north – the obvious flyway for nuclear armed missiles and warplanes to attack North America over the North Pole from the Soviet Union.

To combat the threat of nuclear incursion, the American and Canadian military devised a system of early warning lines using advanced electronic technology. Three lines were constructed, stretching from east to west across the continent: The Distant Early Warning (DEW) Line in the Arctic, the Mid-Canada Line along approximately the 55th parallel, and the Pinetree Line further to the south.

The Mid-Canada Line extended from Hopedale, Labrador, in the east to Dawson Creek, British Columbia, in the west. It had as its mission “to identify inbound airborne objects detected penetrating or operating within the Mid-Canada Line Identification Zone.” The line consisted of eight Sector Control Centres, i.e. staffed bases, doted across the country, each of which was located so as to maintain ten or so remote Doppler Detection Stations (DDS). These remote sites consisted of a building which housed the Doppler equipment, microwave equipment, generators, communication equipment, a helicopter landing pad, towers and masts. By contrast the sector control centres were composed of buildings catering to the administrative, logistical, operational and support functions necessary to maintain the remote sites.

The Dawson Creek base, designated as Station 900, was built by the General Construction Company Limited on 60 acres of vacant land purchased from the Village of Dawson Creek for $100 per acre. The base was made up of numerous buildings, the largest of which was the helicopter hanger. The typical complement of the base consisted of a commanding Royal Canadian Air Force (RCAF) officer, eight RCAF non-commissioned officers and airmen, and between 110 and 135 civilians. Barrack style housing was provided for some personnel and the original site plan anticipated the construction of additional quarters including permanent married quarters, but these were never built.

The Mid-Canada Line operated under the North American Air Defence Command (NORAD) structure. The Canadian Department of National Defence, through the RCAF, was responsible for the general operation of the Mid-Canada Line and in turn civilian contractors were engaged to maintain the line’s functional capacity. Surveillance from the Dawson Creek portion of the line was forwarded to the NORAD bases in Spokane, Washington, and Great Falls, Montana. The line was capable of detecting airborne objects passing through the line at altitudes from approximately 500 feet to 65,000 feet.

The remote Doppler Detection Stations were serviced from the Dawson Creek base using two RCAF Sikorsky S-55 helicopters. These helicopters were maintained and flown by crews from Okanagan Air Services. Of the twelve DDSs which were part of the Dawson Creek Sector Control Centre, ten were located in Alberta and two in British Columbia. There was no airstrip associated with the base, although there was a municipal airstrip close by which was used during World War Two in connection with the Northwest Staging Route and the construction of the Alaska Highway. This airstrip was located just to the north of the base property, running along approximately what is now 112th Avenue. It was closed in 1958 when the current airport was established along the highway to Pouce Coupe.

With the decommissioning of the Mid-Canada Line due to its obsolescent technology and the resultant closure of the base in 1964, the provincial government acquired the site for $250,000 on an “as is – where is, as of now” basis and developed it into the BC Vocational School – Dawson Creek. The transition of the former top secret military base into being a public educational institution was completed in time for the first students to enrol in September, 1966. In 1975 the Vocational School was further developed into Northern Lights College, which began offering a spectrum of vocational, career, technical and academic programs.

When one drives through the present day College property much of the original base remains identifiable, and in most cases the educational use of the former military buildings is even compatible. For example the helicopter hanger now houses the Aircraft Maintenance Engineering Program, the Communications Building houses the College’s Regional Administration, the Mess houses the Professional Cook Training Program, and the barracks serve as student housing. Indeed this transformation from military use to educational use well heeds the biblical exhortation to turn swords into plowshares.

(Note: Paul Dampier is currently researching the history of Northern Lights College and would welcome any information. Paul can be reached at (250) 784-7518 or at pdampier@nlc.bc.ca.)