Amateur Radio on the DEWLine

Amateur Radio on the DEWLine
A number of the technical people who went north to the DEWLine held Amateur Radio (Ham) Licenses and applied for permission to operate while in the Arctic. In Canada, they would have been assigned a VE8 callsign (VE8SJ, VE8SK, etc.).

While some of these people simply used the available Emergency Radio equipment to wile away the long off-duty hours, most spent at least some of their time providing a valuable service to their fellow workmates by arranging for phone patches to their loved ones.

The Phone Patch
For non-technical, non-hams reading this, a phone patch was a device that connected a radio to the telephone lines and provided the ability for the ham at the southern receiving end to patch their radio into the phone line and then call a person and allow them carry on a conversation with the person on the other end of the radio link, i.e. at the DEWLine station.

So why was this so important? In the early years of the DEWLine, when a person went north, it was generally for several months (or longer) at a time. There was no telephone links, no television to watch, no daily newspaper to read, and no radio to listen to. Basically there was no connection with the south at all beyond the weekly mail delivery (weather permitting).

Alone and Lonely
We were extremely isolated. At the smaller Intermediate Sites (I-Sites) there may be as few as 4-5 people. On an Auxiliary Site (AUX-Site) you may have 15-25 people depending upon the season and on a Main Site there could be between 50 and 150 people depending upon the time of year. Inter-site communications didn’t exist except for the technical people and even then they were generally limited to talking to the stations on either side of their station.

All this meant that the ability to talk with ones loved one, especially at a special time like a birthday or anniversary, was very important. Even though the conversation was in simplex mode (only one person could talk at a time), hearing a loved one’s voice after months apart was a treasured moment.

The Emergency Radio Room
All this activity took place in a small room, about 6 by 8 feet, located in the Recreation/Living area of the module train away from the secure Electronic Modules at the Aux-sites, and across from the coffee room in Dining/Recreation modules at the Main-sites. This was done to isolate the emergency radio equipment in case of a fire in the Electronics Module area. The layout of a typical Aux-Site can be seen here.

The Emergency Radio Room was equipped with a Collins 51J-4 receiver, a Collins 431B-1, 1500 watt transmitter, and two, three-element beam antennas (10 and 20 meters) with a rotor that was usually frozen so we left it aimed in a southerly direction. All-in-all, the equipment was a ham operator’s dream station. While we don’t have any photos of the Emergency Radio Rooms or the Collins 431B-1 transmitter we do have a picture and some information the 431B-1’s bigger brother, the Collins 432D-2 (see below). Both models were identical in appearance. We also have Fred Sue’s photo (below) of the DYE-Main equipment which differs from the equipment layout at the Aux-sites. 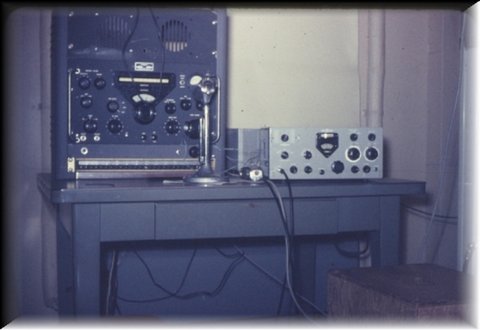 An early picture (early 1950’s) of the Emergency Radio equipment prior to installation of the Collins 431B-1 transmitters (see below). Shown are a Collins 51J-4 receiver and a KWM-1 transmitter. 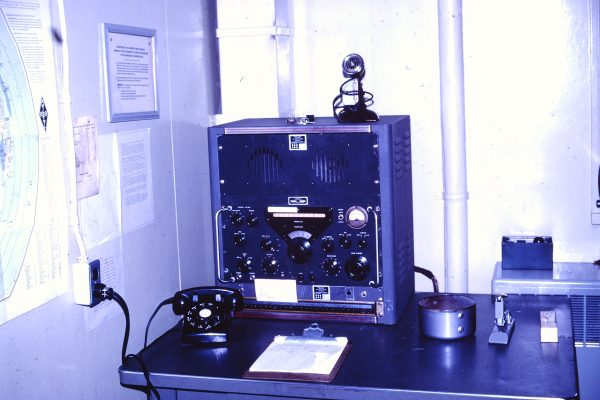 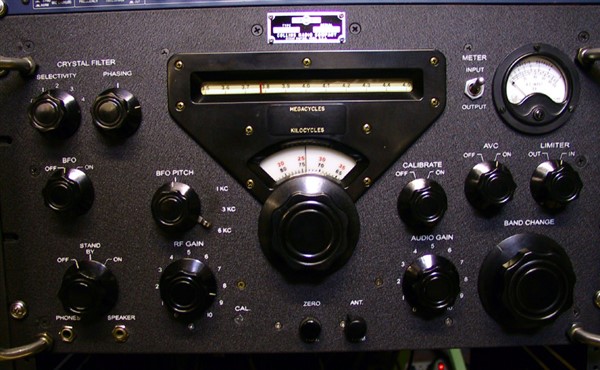 The Collins 51J-4 receiver used in the Emergency Radio Room. 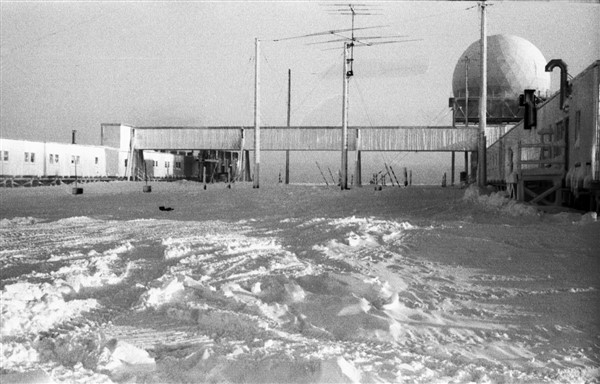 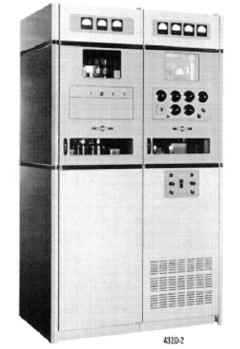 A picture of the Collins 432D-2 transmitter, the 2.5 KW version of the 431B-1 found in the Emergency Radio Rooms at most DEWLine stations. 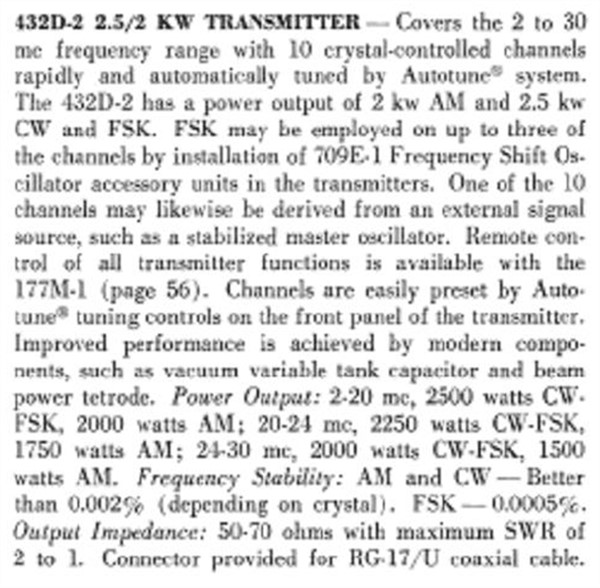 Technical description of the Collins 432D-2 transmitter. The Collins 431B-1 had the exact the same circuitry.

DEWLine Hams and their Stories
There is no formal list of amateurs who operated on the DEWLine and this page is an attempt at building such a list. If you were a ham operator while on the DEWLine or NWS, please contact me at Brian@VE3UU.com so that I can add your information to the table below.

Their Stories:
Rino Manarian: I had a license while at Cam 3, VE8MI, Victor Easy number 8 Mighty Item. My friend Harvey Wice who was an ex army telecom guy could send out morse at about 40 words/min and occasionally he would come with me and he would use the key and start CQing, he occasionally would contact some one in Russia, but they would not even give us their Temperature, so their location was also a secret. Harvey is now a silent key.

Fred Sue:  The photo below shows the equipment layout in our Ham Shack at DYE Main, with which I chatted often with those interesting, friendly…. Soviet hams in spite of the Cold War! While at Dye, I used to contact a fella in Minsky fairly often…. we talked usual stuff, no politics. 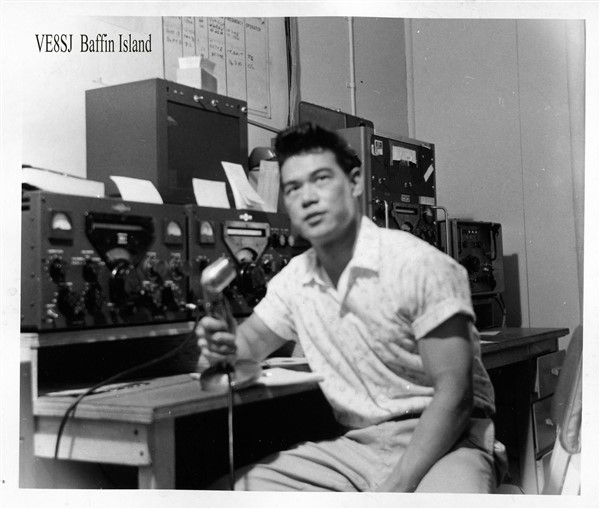 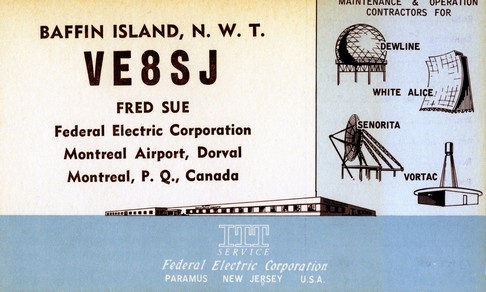 Brian (Simon) Jeffrey: My radio call sign while I was in the Arctic was VE8SK or Victor Echo Eight Sierra Kilo. However, around Christmas time I’d go on the air as Victor Echo Eight Santa Claus from the CAM-4 Emergency Radio Room (see photo above) and I’d have ham operators lined up a mile deep to let their children talk to Santa’s station in the north.

Robin Fry: I operated a ham radio from my room in Cambridge Bay (CAM Main) as well as Hall Beach (FOX Main). I would get up on the roof & string an antenna between stacks. I made contacts in the Ukraine as well as Northern parts of the USA.