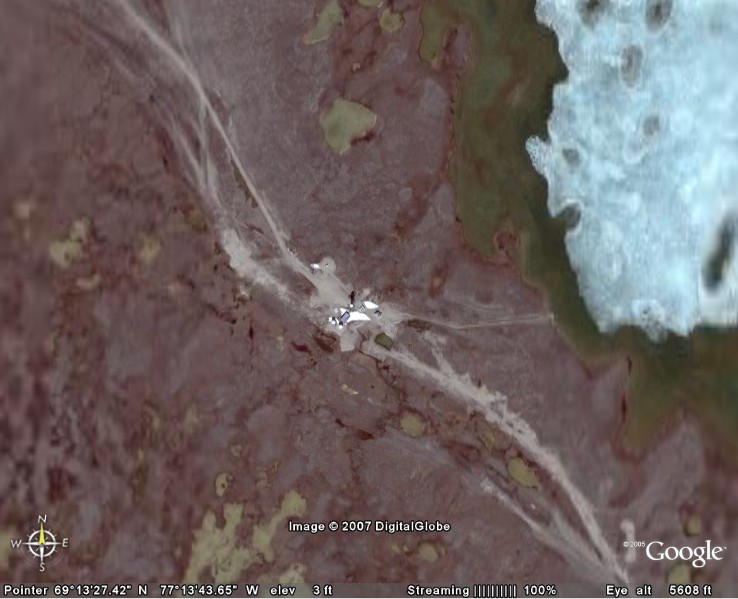 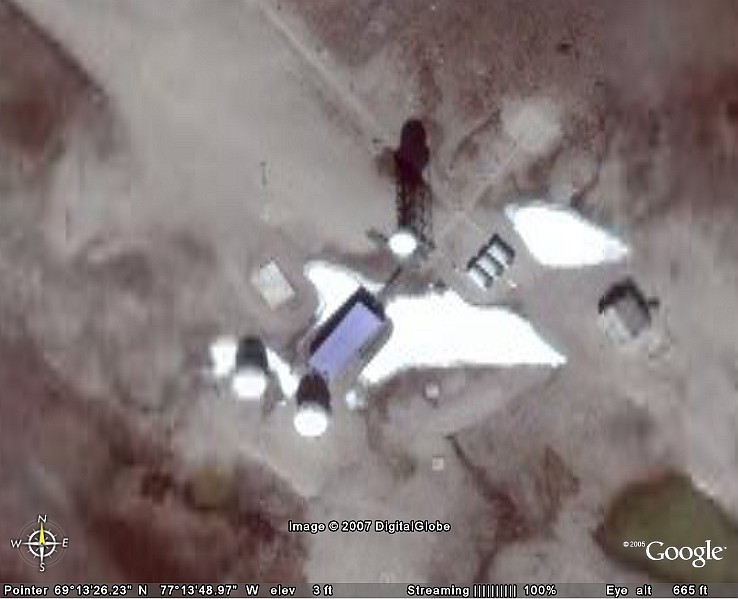 Memories of FOX-A, Spring 1961
by Paul Kelley with further clarification as to detail provided by Bucky Harris and George Whitmer.

Following are 6 photos I took while on a brief visit to Fox A in the Spring of 61. On the outbound flight we went from Fox Main directly to Fox 2 – Longstaff Bluff on Baffin Island and, on the return flight to Fox Main, stopped at Fox A and Fox 1 (Rowley Island). This was the only time I actually visited an ‘I’ site proper rather than just the associated airstrip. 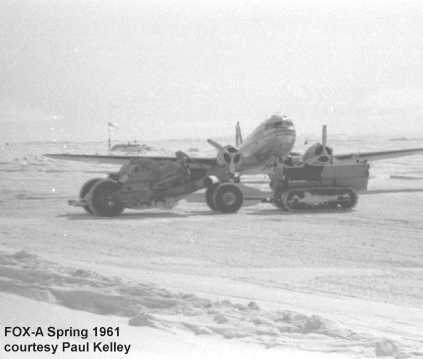 This is a shot of CF-IQD (Item Queer Dog) our lateral DC-3 workhorse which was our transport for the day. The grader (used for preparing the runway when necessary) is towing a small cat for reasons I don’t recall clearly. I think the latter was out of sorts that day but was required to haul the day’s shipment from the aircraft – or something like that. 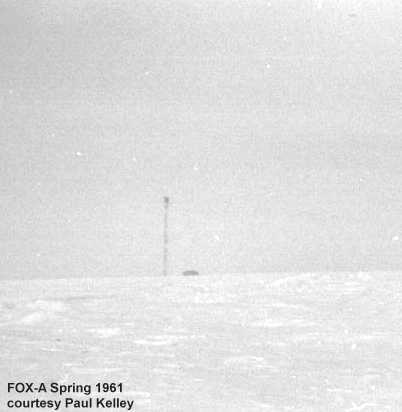 Turning around and facing in the opposite direction to the aircraft I took this shot of beautiful downtown Bray Island in the distance otherwise known as Fox A. The featureless expanse made even Hall Beach look exotic. Flights in and out of here were definitely subject to the weather cooperating. Even in clear conditions spotting the runway was a challenge as there was no distinct shore line between the actual island and the shore ice for orientation. The Doppler tower and site were the only features and, even knowing the relative position of the runway, you still couldn’t be absolutely sure of its location until you spotted the runway lights which were more critical than ever with the bright sunlight on snow. 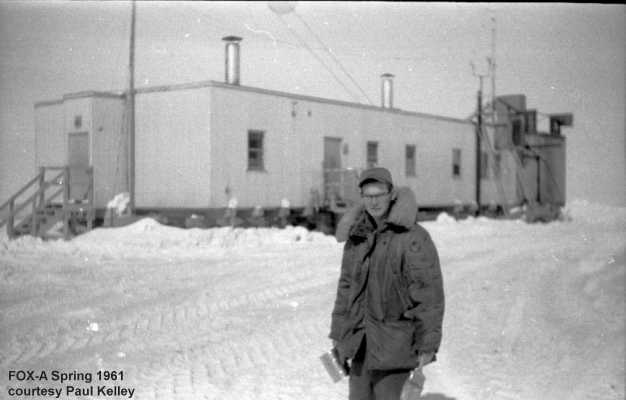 This is a close up of the site itself. Once again I do not recall the name of the guy in the front of shot – most annoying. The site was staffed by a radician (Station Chief), two mechanics and a cook/baker for whom there was accommodation in the modules. One of the mechanics (‘inside’) was responsible for the maintenance of non electronic physical plant and machinery and the other (‘outside’) for operating the cat, road grader and other mechanized heavy equipment on site – although everyone on site had some level of expertise with these in the event of emergencies.

I seem to recall that the ‘outside’ mechanic on this site was an Inuit who lived with his family nearby. There were other buildings nearby but I only have a non-too-clear aerial view of them – See Photo 6 in this series. Most of these were probably the Jameson buildings used for storage on site and accommodation for transient personnel but one of them may well have been his accommodation. He was down at the runway at the time of our visit but I distinctly recall the Station Chief remarking on how he and his family were provided with supplies but otherwise made their own arrangements.

The site consisted of 5 modules if memory serves:

1 – The Power Module
This was the most distant module in the photo and housed 2 x 20 KVA diesel generators. One was strictly to power the radar and other electronics. For the radar feed the 60 cycle output of the generator was passed through a 400 cycle converter. The other electronic gear took the 60 cycle output. The second diesel powered the module utility circuits, tower and runway lights. A third 20 KVA generator was housed in the garage and could be switched to either of the other circuits as backup if required. All this was controlled from a panel in the Power Module.

2 – The Equipment Module
This was the next module along and housed the pair of AN/FPT-4 Doppler transmitters which transmitted E and W to Fox 1 and Fox 2 respectively and were the reason for the site’s existence. The AN/FPT-4’s and their corresponding receivers (AN/FPR-2’s) at the remote sites together constituted the AN/FPS-23 system. Also in the equipment room were a GE VO38 ground-to-ground FM 50W transceiver for local voice communication with vehicles and the adjacent Aux sites as well as the Collins 242F3 100W transmitter and corresponding 51M7 receiver for VHF air-to-ground communications.

3 – The Kitchen/Dining Room/Lounge Module
This was the next module in sequence.

4 – Accommodation/Toilet/Shower/Sewage
We entered the site via this module through the side door behind the head of the unknown gentleman in the photo. We turned right and passed through this module to the Kitchen/Dining area. I do not now recall whether it was a centre hall or outside hall layout but I think it was the former. One quarter of this module was devoted to shower /toilet/ sewage storage and the remainder to accommodation organised, I think, into three separate rooms. I can’t verify this as we did not have a ‘tour’ of this area. Nor did we have occasion to use the toilet so I can only assume that it is adjacent to Module 3 on the far side in the photo. I don’t recall there being an access to it from the kitchen area although apparently that was the arrangement on some other sites.

5 – Water Storage Module
Once again I did not see the inside of this module so can’t describe in any detail what the arrangements were for water storage. 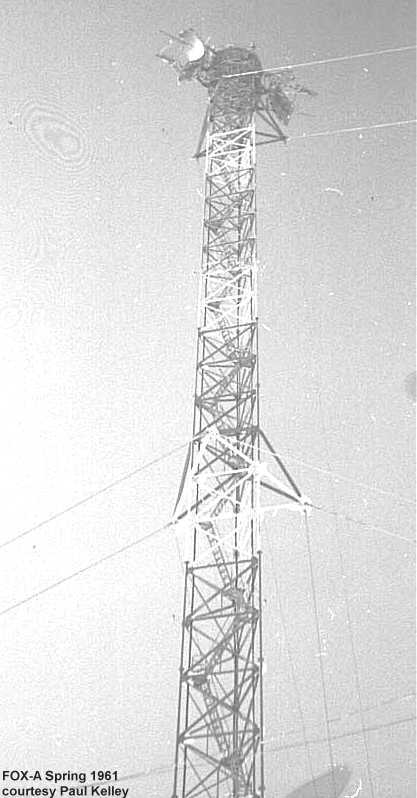 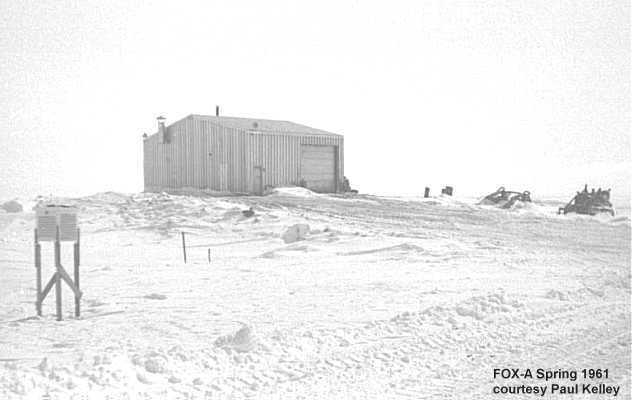 A shot of the garage, a short distance away from the module train with the Stevenson Screen in the foreground housing the max-min thermometers etc. In addition to serving the usual garage functions it also housed the 3rd generator as mentioned earlier as well as the Marconi TR100/6 100W HF transceiver. This was tuned to the HF disaster frequency of 5295 KHz which was monitored by all Aux and Main sites. As usual, the garage was the last refuge in the event of a serious problem in the module train. 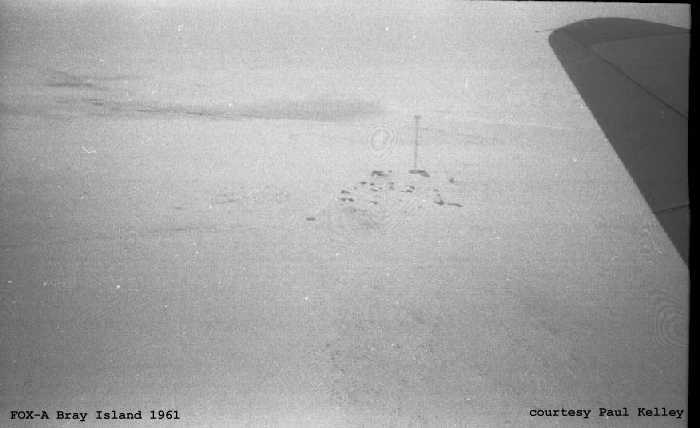 Not a scintillating shot from any perspective but it is the only one I have of the overall area. It was taken as we were descending to land at FOX A.